Running is so fun, I'd even run to the Dump 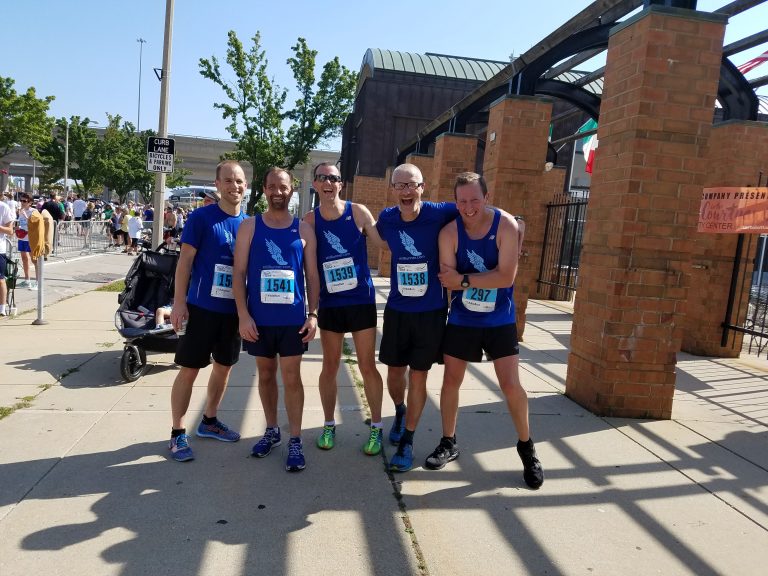 Al’s Run is always one of my favorite events of the year, largely because of the team aspect. As I’m sure almost everyone reading this is aware, Team HillRunner.com has been represented at Al’s Run for well over a decade by now. If I have the count right, this was the team’s 14th year under the HillRunner.com banner. It’s also my 17th year at Al’s Run and my 16th year as a member of a team (Team GTI first, which became the original core of Team HillRunner.com).

There are two things I absolutely love about this team.

First, the great people. From the veterans like Double and Cameron, who have been on this team for as long as I have or maybe longer, to the newer members like Andrea, I’ve always been incredibly grateful who are willing to join the team.

Second, the team aspect itself. I miss the days of team running. This is the one time a year that I get to go back to those days. There’s just something about running on a team. You’re out there for more than just yourself. Your teammates are counting on you. When it gets tough in the late miles, you can remind yourself that this is about more than just yourself. Then, you finish completely exhausted but you have to turn back immediately and cheer in your teammates who are still on the course. Why do you have to? Because they are your teammates!

Heading into the race, I wasn’t going in with a lot of confidence. Over the summer, I think I pushed a couple aspects of my training a little too hard and I was getting very beat up. While those things subsided by the beginning of September, I was making adjustments in my training through July and August and my paces weren’t what I normally expect of myself. But things were turning around and I was at least confident in not running as poorly as I had feared a few weeks earlier I might. What would that mean? Well, I was about to find out.

After handing out packets and catching up with teammates for a bit, we went out for our warmup. It’s always fun to do the team warmup there, with everyone decked out in HillRunner.com gear running in a pack down Wisconsin Ave in downtown Milwaukee. There was no doubt this was a warm day. Instead of planning for where we would be battling a headwind, I found myself thinking about where I would have a tailwind creating dead air and a lot of heat. I decided that would be primarily in the second and third miles and we would hopefully catch a cooling breeze late in the race.

At the start, I lined up on the left as has become custom (most of the lead runners line up on the right so going to the left gives a more clear path). I got out well, feeling solid but not too fast. Not much happened until I noticed Cameron pull up on my shoulder. It was good to have a teammate running with me. Then a stroller passed us. I don’t remember if I said it to Cameron but, watching this guy push the stroller past us, I know I gave Cameron some reaction as I thought “he’s just that much better than me”.

I don’t precisely recall all of my splits but I do recall going through the mile in about 5:53, I’m not sure if it was just before or just after I passed Cameron but we essentially ran the whole first mile together, which was great.

Mile 2 at Al’s Run is always a slow mile. I expect a fast split in mile 1 because it’s almost all downhill. I then expect to essentially give up all that time and a little more in mile 2. Instead of worrying about pace in this mile, I just focus on running hard, competing, and not giving up too much time. I know I made more passes in this mile than I got passed so I considered that a victory. I also had a couple of people working with me, which was nice. I believe I hit the 2 mile mark around 12:20 so roughly mid 6:20s. Slower than I would normally like but, given the summer I had and the heat of the day, not a disaster.

I did want to try to pick up the pace in mile 3, see if I could get back at least close to 6 flat. Again, though, I would do that through competing. I was working on catching up to some runners and making a pass. The crowd was a little thin with small packs forming so there wasn’t a lot of passing to do but I just kept focusing on the first guy ahead of me. If someone tried to pass, I’d do all I could to either hold him off or stay with him. As far as I recall, I didn’t let anyone pass me and get away in this mile.

Then we got to Lafayette Hill, just before the 3 mile mark. This is where you go down from the bluffs above the lakefront to Lincoln Memorial Drive on the lakefront. I leaned into the downhill, made a couple passes, and told myself I want to pick up some momentum to carry into mile 4. I believe I hit mile 3 in the 18:40s. So essentially maintaining pace.

Mile 4 at Al’s Run is where I believe the race is decided. It’s a long stretch, staring at downtown Milwaukee the whole way. It can be mind numbing and seem to take forever. Or you can attack it and make some passes of others who are falling into the trap. When I run well, I’m attacking this mile so I always go in with the goal of doing just that. After using the downhill to pick up some momentum, I attempted to carry that momentum into mile 4. As I was gaining on the guy ahead of me, someone came up to pass me. I went with him and, while he may have gotten a half step, he didn’t get away. We both made the pass on the guy in front after working together for a while. I seemed to get back in front of this guy I was running with, then he came back. At one point near the end of this mile, there is a slight curve to the right but everyone seems to always run down the left side of the road. I wasn’t into that, I wanted to take the short line, so I crossed to the right. I felt like someone behind came with me but, at the same time, a guy just ahead of me stayed to the left. This gave me the opportunity to gain on him without having to pick up the pace. As I merged back to the left for a left turn, I had made some significant ground on him and we were now essentially running even. When he saw me, he went and I tried hanging with him. I did through the 4 mile mark., which I believe I hit somewhere around 25:00, meaning I did pick up the pace a bit.

Into mile 5, I was gassed. I gave it all I had in mile 4. All I could do was tell myself less than a mile to go. The guy I gained on and the guy I was running with both passed me early and I had no response. My legs just wouldn’t go. I did all I could to keep it close but it just wasn’t there. I kept battling through the final turns and tried to kick down the final straight. With nothing left, I’m sure the kick looked pathetic but it was all I had.

I ended up finishing in 31:14. Not a time I’m thrilled with but better than I was fearing.

By the time I turned around, Cameron was coming in. When I looked up after he crossed the line, Ed was on his way in. I then slipped out to cheer in Double, Josh, and Andrea from the sidelines.

As far as I’m concerned, it was a successful team event. On a difficult day, I feel team members battled through well:

I left this race feeling better than I had after my prior race but still not fully confident in logging my 22nd consecutive year with a sub-17 5K. That said, in the following week, I had some solid training with splits that suggest I’m not too far away. Today, I did a workout where my splits were poor but the weather was also rough so I’m going to hope that, when the weather improves, I can still take a legitimate shot at another sub-17 in about a month.

Until then…time to put my head down and get in a lot of hard work.